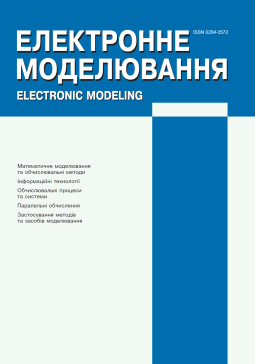 In the late 70's of the past century the scientific problems connected with creation and efficient use of automation means of planning, design and control for various processes and objects became urgent. The important part in development of this scientific trend was assigned to modeling as knowledge instrument which permits investigating the process or the object under study by imitation of its behavior using another process or object, more convenient for a researcher.

Mathematical modeling has been used for a long time as the instrument of knowledge for scientific and practical purposes and permitted deciding practical problems of increasing efficiency of public production, accelerating scientific and technical progress, growth of labor production. Modeling as an instrument of knowledge permits efficiently studying the investigated process or object at all stages from design to creation and operation.

By the time of the journal foundation in 1979 considerable experience has been accumulated in the field of development of modeling methods. It was noted in the editorial paper published in №1, 1979:

...the methods and means of modeling have been studied for a long time. Thus the fundamental works by Academician M.V. Kirpichov, V.L. Sedov, N.N. Pavlovsky, S.A. Lebedev in the field of the theory of similarity and modeling engineering are worldwide known. Great contribution to development of the methods of modeling were made by scientific collectives and scientific schools of the Institute for Problems of Control of the Academy of Science of the USSR, Moscow Power Institute, Institutes of Siberian Division of AS of the USSR, Institute of Cybernetics of AS of the Ukr. SSR, SIISchetmash, Institute of Precise Mechanics and Computer Engineering, CC of AS of the USSR, Leningrad Electrical Engineering Institute, etc.

The journal Electronic Modeling (Electronnoe Modelirovanie) published materials which comprehensively reflected problems connected with mathematical modeling. That is proved by the main trends of the journal presented below.

It was also noted in the editorial paper

... the Editorial Board will give preference to works connected with modeling of high-speed processes and dynamic objects in power engineering and other fields of national economy, with nontraditional methods and means of information processing, as well as with modeling which allows reaching high equivalent speed for problems solution. Side by side with original and survey papers the journal will include brief notes in certain problems of the theory and practice of modeling, reviews of new books in the field of modeling and its application, information on new modeling systems, at conferences, seminars and symposia held in the country and abroad. The journal is intended for the broad circle of scientific workers and engineers of academic and branch organizations connected with development and use of the methods and means of modeling in science, engineering and national economy. It will also be of use for lecturers, post-graduate students and students of special higher educational institutes and faculties...

G.E. Pukhov showed high consideration for the papers offered for publication in the journal. He read personally all materials to be published in the next issue. Inner reviewing and independent outer reviewing were foreseen for providing and further support of high level of the journal. After that the decision about papers publication was taken by the Editorial Board. These rules have remained unchanged till now.

During the period since 1979 till now the methods and means of mathematical modeling have been considerably developed. Considerable success in the development of engineering and software means of modeling have changed the role of electronic modeling, and the urgency of mathematical modeling as the knowledge instrument has essentially increased. The journal trend has remained unchanged since 1979: presentation of investigation results connected with development and use of the methods and means of modeling in science, engineering and national economy.

The heading titles of the journal in 1995, 2004, 2009 change in correspondence with changes of problem priorities of investigations connected with mathematical modeling. There are five headings in the journal now.

Status of the journal Electronic Modeling (Electronnoe Modelirovanie) changed in the historical context.

International Editorial Board was created in 1991.

The journal was given the status of the international journal in 1992.

The journal translation into the English language became a significant stage in its development. The journal was translated by the publishers' firm Gordon and Breach (England) under the title Electronic Modeling in 1981-1991 and under the title Engineering Simulation in 1992-2011.

Besides the Editorial Board which includes well-known scientists of Ukraine, the journal has its Regional editors:

V.F. Yevdokimov, Corr. Member of NAS of Ukraine, director of G.E. Pukhov Institute for Modeling in Energy Engineering of NAS of Ukraine was been the Editor-in-Chief of the journal Electronic Modeling (Electronnoe Modelirovanie) 1999 - 2016.

Articles of foreign authors from many countries of the world have been published in the journal Electronnoe Modelirovanie (Electronic Modeling):

Six specialized issues of the journal Electronic Modeling (Electronnoe Modelirovanie) in urgent problems of mathematical and computer modeling have been prepared and published.