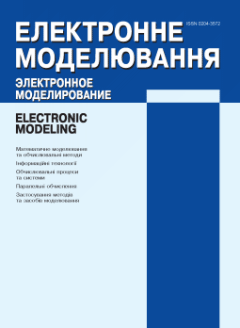 The article sent to the Editorial Office should contain the following items:

The article, including references, tables, figures and captions, should not exceed 16 pages (one and a half intervals), review article – 25 pages, a brief message is 7 pages.

On the first page in exact order to print:

The article text should be font Times New Roman, 12 pt with one and a half intervals (spacing) in the editor Microsoft Word 97-2003 or later versions and submitted file type *doc.

Mathematical formulas are created as separate objects in the formula editor, locating at the centre of the page. Formulas that are referred in the text should be numbered consecutively. Formula number is put in parentheses at the edge of the right margin of the page. Character size in the formulas: normal-14pt, large-18pt, small-12pt, large index-7pt, small index-5pt.

Tables should be numbered in order of mention and references to them in the text. Tables should not have the empty graphs, dashes and shortened words. Font in the boxes of the table is Times New Roman-9pt, head of table-8,5pt. Digital materials in the tables are printed with double spacing, the text of the head and the table outset with a single spacing.

Graphs (in eps, ai,cdr format) and photos (with a resolution of at least 300 dpi) should be sent as separate files. Graphs and diagrams are allowed in the Exel editor. Figures are not allowed in the Word editor. If figures are made in MatCad, MatLab, AutoCad programmes and similar ones, it is necessary to convert them into eps format or as an exception into tif format with the resolution of at least 300 dpi.

Evaluation of results should be summarized in the article section Conclusions without repeating the information from other sections and without enumerating what has been done. The conclusions should not contain the descriptions of algorithms, methods, procedure of researches, etc.

List of references is made in the order of the source mention in the text according to the standards. When making a list of references one should follow the norms of self-quoting, that is, the number of works of the article author/authors cited in the list should not exceed 30 %.

After the main text, the following information is placed in English: